With the spotlight shining high and bright on skateboarding, in terms of the sport and the style that comes with it, it's more important than ever to be supporting your local store. I was prompted to write this article when I heard last week that Parlour Skate Store, previously located in Shoreditch, London, had closed their doors for a plethora of reasons: burglaries, rent reviews and, yeah, Brexit. That's not to mention, last year saw Oxford-native, SS20, close their doors after 28 years of brick-and-mortar and online sales. SS20 played a huge role in the skate community in Oxford with co-founder, Mon Barbour, being the driving force behind the Oxford Wheels Project: a charity that pushed for a permanent skate park in Oxford. SS20 did an amazing amount for the local community and were the longest-running independent skating store in the UK - being a perfect example of what a skate shop should be:  a retail spot as well as a community hub for skaters alike. But, with this growing popularity comes a cost - larger retailers jumping on the bandwagon, with no appreciation for the culture that comes with skating.Given the price at which retailers, such as Sports Direct, can offer skate gear at makes you question why you'd both your local skate shop when you can save yourself £25 elsewhere - hopefully myself and the individuals I spoke to can convince you otherwise! 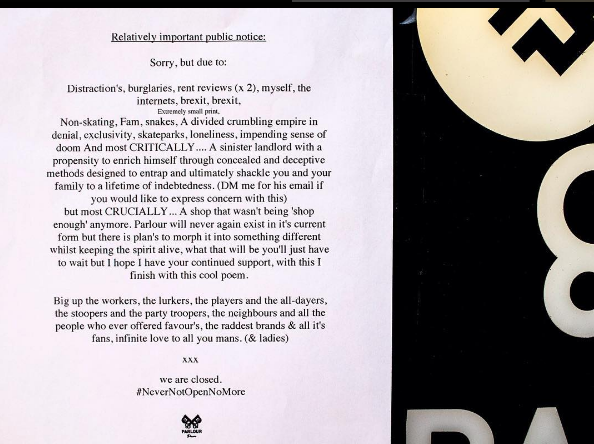 To help get some insight from some industry insiders, I reached out to four individuals, all of which are involved someway or another in the skateboarding industry: Ian Budd, Nick Sharratt, Matthew Coules and Stefan Schrey. These guys all have an active role in the industry, whether that be by owning their own store or by designing skate parks, so are more than aware of the importance of #supportyourlocal.

Please state your name and involvement in the skateboarding industry.

Ian Budd. I'm currently the owner of Pretend Supply Co, but I previously worked at SS20, Oxford, for 19 years, fulfilling roles such as advert and website designer to head clothing and footwear buyer.

Given your role in this particular scene, you're more than likely aware of the hashtag 'SupportYourLocal', which is based around supporting your local skate store. Why do you think this is so important?

As far as I'm concerned, all skate shops should be 'Skater Owned'. People need to be able to trust your advice and product selection and the only way a store can truly do that is by them using the products themselves and understanding the needs and demands of the customer. It also means that the store and its staff are involved in the whole sub-culture of skateboarding so they can talk to the customers on a level and in a language that they can relate too. Skater owned shops are the heart of that towns scene - promoting events, putting on video premieres, hooking up local kids etc. It's all about the grassroots....

Finally, what are some of YOUR favorite stores that you support/shop with?

Obviously I was a big supporter of SS20, even after I left to start Pretend I was devastated to see that close. Aside from that, Gaz at Decimal in Cirencester does a fantastic job and Syd has been holding it down at FiftyFifty in Bristol for decades doing great things. I know how hard this industry can be, so basically ANYONE that runs a skater owned shop is a favourite, though!

To find out what the other guys had to say you can read the full article here.